When I mounted the 4-jaw and indicated it, I found that it is off now with the new spindle. I have tried to turn the surface of the front and back of the 3/4 adapter, but it does not help. I think it is because that the center line of the inside and outside thread are not matching with the new spindle. Since the 4 jaws are adjusted independently, there is not much need to remake the adapter. The only downside is there might be a bit off center mass, but that may not be much of a problem for the limited precision of my lathe. 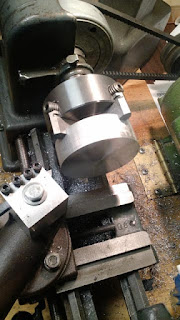 The 3-jaw is a different story. It is off by quite a bit. My 3-jaw has a plain back and has a cast iron backplate adapter. But when I took them apart and attempt to refit it, I found that it may have never been properly fitted previously. The spigot is cut a bit too small. I will have to turn it all flat and turn a new one from what is left. I happen to have a 1" thick piece of 3" rod aluminum. So I decide that I will use that to make a new backplate and leave the old one alone.

I did some research on whether aluminum is strong enough as the backplate (the standard material is cast iron), and found no definite conclusion. Then I decided that I will just go ahead and do it. The thread mating between the backplate and spindle might be a bit soft, but it should work if I use it carefully.

So I mounted my 4-jaw chuck with the jaw facing outside (which holds the 3" piece with no problem) and started working on the backplate. The procedure is pretty simple, and there are plenty of information on Internet on how to do it. So I will skip the details here. Soon, I have this blank piece of backplate. 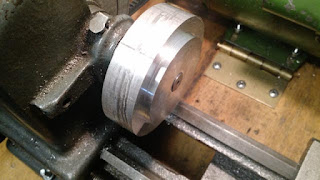 The hard part of this project is to locate the mounting holes. The location of the mounting holes is not super critical as the precision of the fit is decided by the size of the spigot. But I like to make them as accurate as possible. Instead of measuring the hole circle radius and dividing the circle to three parts, I decided to go with a simple method of making a few transfer punches as indicated in the picture. The mounting holes are M6-1.0. So I turned a few M6 screws down to having a small spike in the middle and cut a off-center slot so I can use screw drivers to get them in and out of the mounting holes on the chuck. A few light taps marks the location on the backplate and they are drilled to through holes for the M6 mounting bolts to pass through. The holes are numbered and marked as well as the mounting holes on the chuck, so they are always going back the same way. 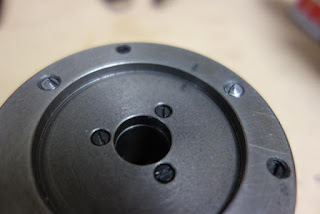 With some very careful turning, I have my backplate fitted for the 3-jaw chuck. The TIR on the backplate is almost nothing, but to my surprise the TIR on the perimeter of the chuck is 5 thou. I re-check the TIR of the spigot and found it to be nearly zero. So the chuck is not perfectly centered with the register. With a test piece mounted (and tightened with the best chuck wrench hole), the TIR is about 2 thou. That is much better than before. I will probably need to grind the inside of the jaws someday, but for now, that will do.

Here is my 3-jaw chuck mounted with the newly fitted backplate. Another good thing about my backplate is that it is about 1/2 inch thinner than the old backplate, which moved the chuck a bit closer to the spindle bearing (but still not close enough as the 4-jaw). 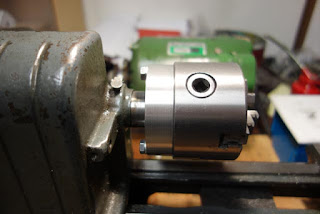 If the spigot on the original chuck adapter was machined too small resulting in a loose fit with the counterbore in the chuck....you can use that to your advantage. You can mount the chuck, get the bolts slightly snug, and mount your test rod in the chuck. Using a dial indicator, you can then rotate the chuck and lightly tap on it until the test rod is running true. This will dial in the center of the chuck to the center of the spindle. Then finish tightening up the bolts.

The video below is of a Chinese lathe, but illustrates this idea. He starts discussing this around the 1 minute mark.

Of course, this will be required every time that you mount the chuck, but it would not take much time.

On the other hand...any reduction in weight or center-of-gravity is worth pursuing for the sake of that small spindle. So if that aluminum adapter works, it is going to be an improvement in this regard.

If the spigot is machined too small, then the chuck is essentially hold in place by the friction force between the chuck and the plate. I am kind of worried if it is strong enough.

You would be surprised at the restraining force offered by the mounting bolts. The fact that this lathe has a very delicate spindle, will dictate light cuts. So it is unlikely that you will generate cutting forces that will shift the chuck once it was centered, even on a slightly loose spigot fit.

The primary wear on the aluminum adapter plate will be the threads. Anodizing would help but is not worth the trouble. It would be easier to just machine a new adapter if needed. Wear on the surface where the chuck mounts will be insignificant.

If you ever machine a new spindle, I would machine it with 3/4-16" threads so that no adapters are required for Taig or Sherline chucks.