Fixing a gunked up motorcycle carburetor

I haven't ridden my motorcycle for a long while (almost a year). So when I got it up last week, it would not run. So it is time to do some fixup work.

The Problem: The battery has been connected to a charger all the time, so it turns. The motor starts with choke on, so that was a good sign. I knew the carburetor has to be gunked up, and my plan is as long as it starts I will ride it for a while with some cleaner added in the fuel to clean it up. So it is a welcomed sign that the engine starts with choke. The troubles comes when I tried to give it some throttle. Just a little turn on the throttle stalls the motor. I did manage to get through the stall point and really reved up the engine but the second I let go the throttle, the engine went off. 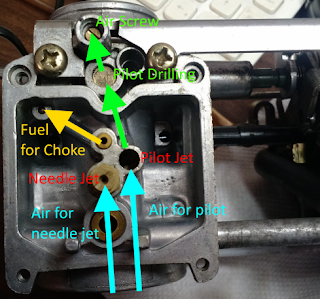 The Hypothesis: After some Googling and thinking, I figured out that this is a problem with the pilot of the carburetor. The engine runs under chokes, so most of the system is doing fine. It does rev up at full throttle, so the main jet is not stuck. So it is the pilot that is clogged. The telltale sign is that the engine stalls when throttle is applied. At low throttle, the fuel is mostly supplied by the pilot system, so it must be those that are clogged.


The Fixups: It is relatively simple to take out the carburetor on a motorcycle. Here is a picture of the under side of the carburetor with the fuel bowl removed. The arrow shows the flow of air / fuel and mixture inside the carburetor body. On the pilot system, the air comes in on a long passage, picks up fuel at pilot jet, and goes into venturi at the pilot drill points and the air screw.

I took out the needle jet and the pilot jet. The needle jet is relative easy to take out, and it is not clogged (because it relatively big in size). 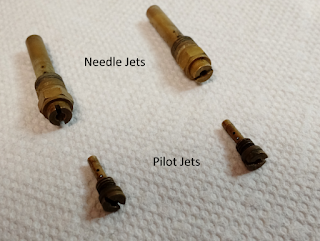 The holes in the pilot jet is very small. It read that people (the professionals) advice against enlarging or cleaning these holes, but with an old motorcycle like mine, I got to do whatever I felt making sense. I am not sure if I can find those replacement parts. 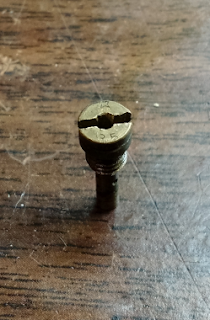 The head of the pilot jet has number "35" stamped on it. I guess it probably means that the hole is 35/100 of a millimeter in diameter.  (By the way, the K mark at the top indicates that this is a Kaihin part, according to this page I found.) I happened to have a lot of tiny drill bits (in various sizes) from previous work. I took those out and soon found one that seems to go through the hole just right. One of the pilot jet has a hole so clogged, that I have to put the drill bit on my Dremel tool to drill through it.

Now it is time to clean things up and put it all together. And the engine starts right away, and goes well when opening the throttle. I guess now I will need to take it out a bit more frequently.