Hot water get into the cold water pipe - Fixing a crosslink

Ever since we moved into our current house, I have noticed that there are hot water in the cold side pipe. Every time when I turn on the cold water, it runs hot for a while before it gets cold. We have been living with it for a few years. But recently it gets worse and worse to the point that I have to waste a lot of water in the shower just for it to get cold enough so I can get in. It is time to roll up the sleeves.

I started with some research to find out what the problem should be. There are a lot of causes, and nothing points to a clear direction. I went around the house opening and closing the valves under the sinks and faucets, but can not figure out what gives. Then all the sudden, an idea comes to my mind: why don't I shut off the valve of the hot water altogether (you can not shut off the cold water, which will shut off everything), and see if there are still hot water coming out of the faucet. Sure enough, it did. There we go, there is a crosslink between the hot and cold sides.

But where is that crosslink in the whole house? It took me some more research and thinking to figure out the method to locate it. But here is what I learned and want to share. There is only a few places in the house where hot water meets cold water. Most faucets have separate hot/cold valves, so you can easily eliminate them. Washing machines and dishwashers can also be easily ruled out too. The culprit is usually the shower where the hot and cold water are mixed together.

To make things complicated, there is usually no easy way to turn off water supply to a shower (of course you can turn off the shower, but that does not show anything). So how do you locate the crosslink? Here is the trick: by listening. Shut off the hot main supply, and run hot water in a faucet. As we said earlier, if there is no crosslink, there should be no hot water from faucet. A running hot faucet with hot water main supply turned off indicates water coming from cold side through the crosslink. Now going around the house listening to the sound of water rushing through the crosslink. It can then be located.

The crosslink in our house is at one of the showers downstairs. I opened it up, and disassembled the thermostat knob. It looked a bit rusty but nothing seems broken. What is strange is that I can not figure out how the water would NOT crosslink. The thermostat is mixing the cold and hot. Further more, replacing all the rubber seals does not seem to fix the problem. 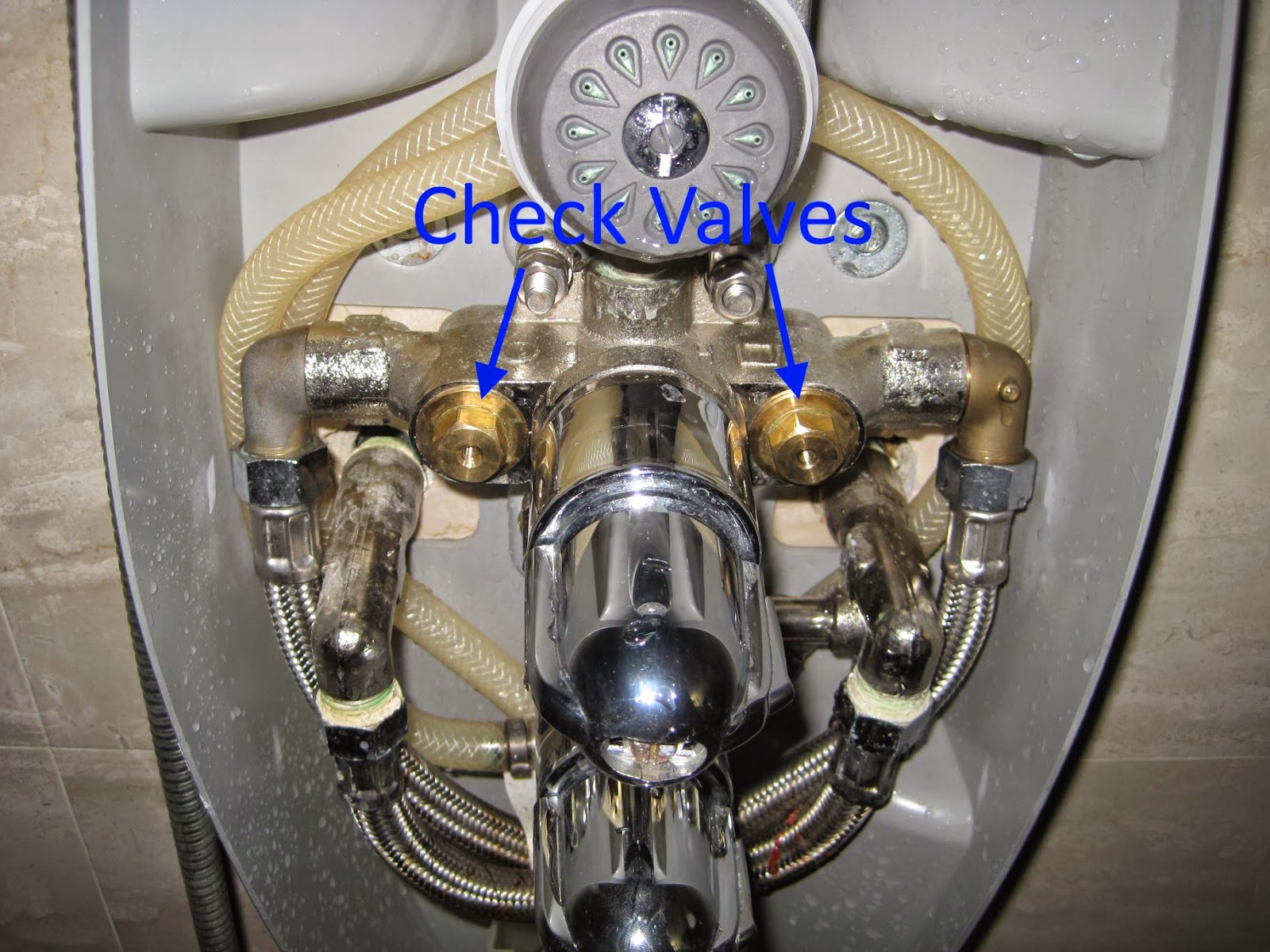 A further research and check found that I have missed the real piece on the shower that keeps the hot and cold separate. It is called "check valves" or "no-return valves". On the Grohe shower we have, it is on both sides of the thermostat mixing chamber. Taking them out found that they are indeed broken and with a lot of hard black stuff grown on the valves. 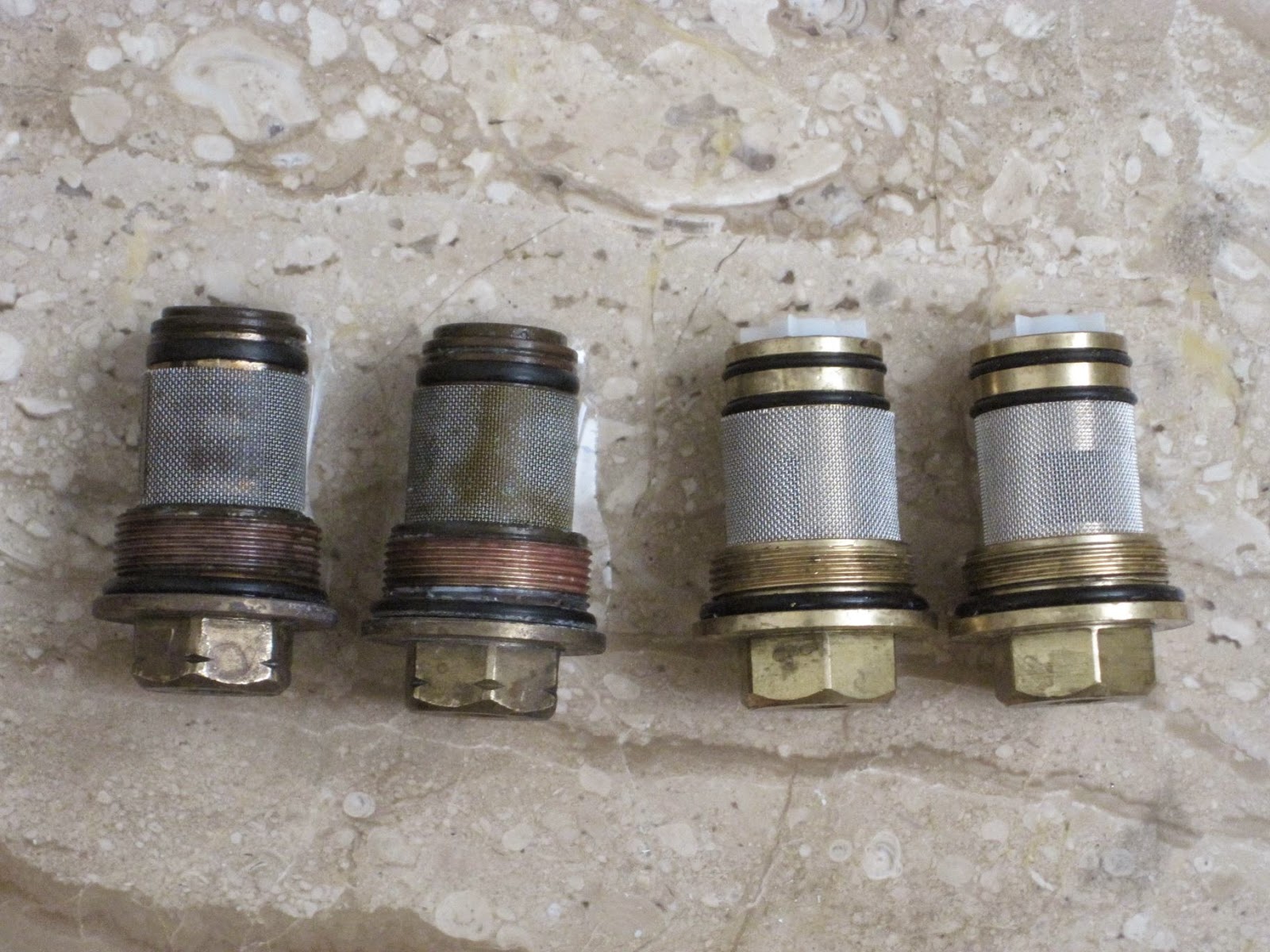 The rest is easy. Go on Internet, find the part diagram for the shower we have (Grohe AquaTower 2000 - 27018000). From there, get the part number (1411600M). Then do an Internet search on it. I found the best deal on Amazon. The parts looks a bit different from the ones I have, but I think it should work. (Some plumbing stores do sell parts with
the same part number but looks exactly the same as what I have, but at a higher price). By the way, the parts come in pairs so I just need to order one of 1411600M.

The valves arrived in a week. I have them installed. And a test shows that now I have zero crosslink.

I think this is an informative post and it is very useful and knowledgeable. therefore, I would like to thank you for the efforts you have made in writing this article.
Hot Water System Replacement in Wyndham