Now I got the CNC working and made some test cuts on wood, plastic, and aluminum. Everything works beautifully. It is tight and precise after calibration. And what I like most about the traditional compound table and fixed head design is that I can change the tool bits between different cuts without losing the X/Y coordinates. This was not possible with my previous ShapeOko build.

While I am continuing back to build things useful, I quickly run into a limitation of this CNC. The Y travel of the compound table is only 43 mm (a bout 1-3/4 inches). That limits the parts machined to a very small size. I have mentioned in my previous blogs that there are a couple of ways to extend the Y range (such as Retromaster and 0xFRED). Personally, I think the method by Fred is a much better solution.

First, I went out and bought some small ball bearings from eBay for a few bucks (thanks to China). The bearing is of the size 6mm ID x 12mm OD x 6mm thick. It is small and fits well into the limited space there. The stock Y axis threaded rod is just a bit short, so I also got M6 threaded rod from McMaster-Carr (a great place to source parts, material, and tools). Note that by convention, the Y axis rod is always left handed, although it does not matter if you don't plan to hand crank it. I may replace it later, but for now the center driving nut is left handed, so to make things simpler, I got a left handed rod. 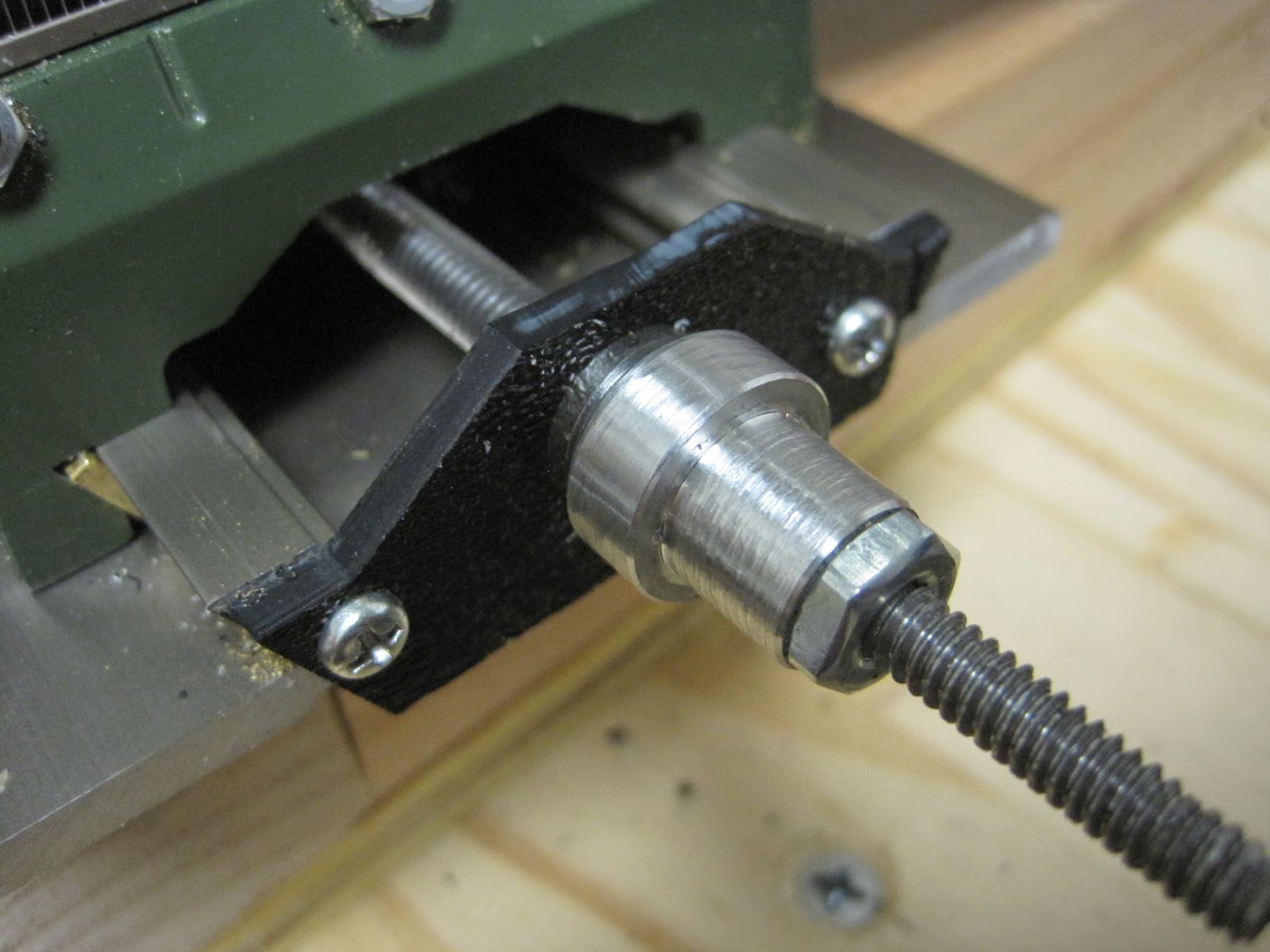 Since I have a lathe, I decided to turn down the end of the rod. I have also turned a small collar to go on the rod. Since I don't like the holding pin Proxxon originally used, I decided to use a die to thread the end that I have just turned down, and to hold the collar in place with a small nut. This has proven to be a bad idea (which I plan to fix later with a different design). As one can see from the picture here. The rod is made with soft steel, which is very difficult to machine. So the thread I made on it looks terrible. Further more, I found that the holding nut will get loosen after some time. But for now, that has to be it. I will have to make it work so I can use it. Proper solution sometimes is a luxury a home shop could not have. 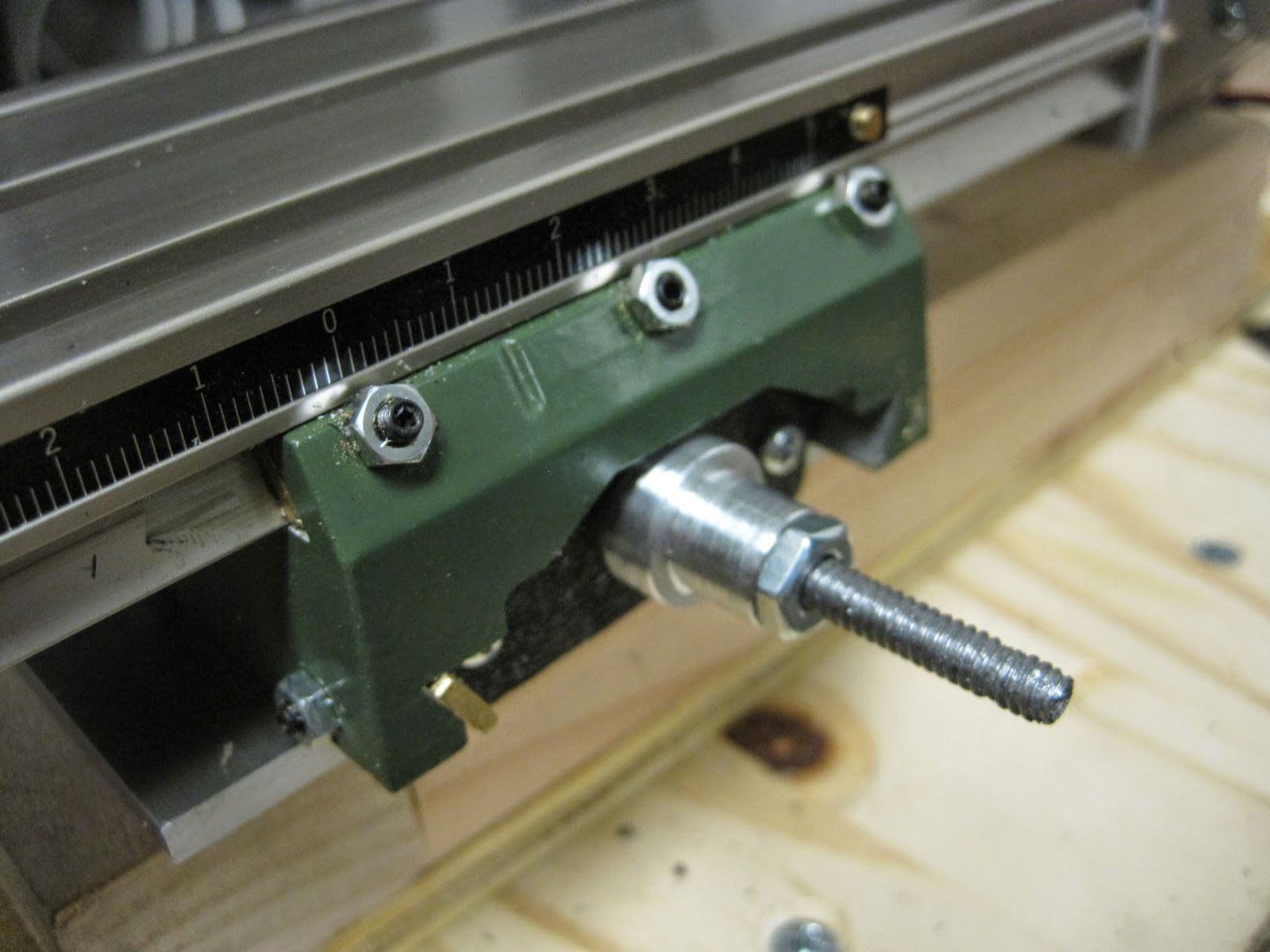 So after measuring the sizes, I got the CNC to cut a part for itself. (A machine that can be used to build itself - sounds like a neat line) Anyway, I made the pieces with some 1/8 inch ABS plastic I have laying around. ABS is just strong enough for a temporary piece, and if my measurement is off I can make things fit with a utility knife (as shown in the picture above).

In another picture, the moving part of the compound table is sliding beyond the end plate of the Y axis. After everything is assembled together, I got to measure the travel of my new Y axis. It is now a whooping 100mm (just under 4 inches). Now I can finally cut pieces that are wider than 2 inches.

Here is how the new extended Y axis look like now. I will come back to fix the rod with a better design and remake the end plate in aluminum. But for now, it works. 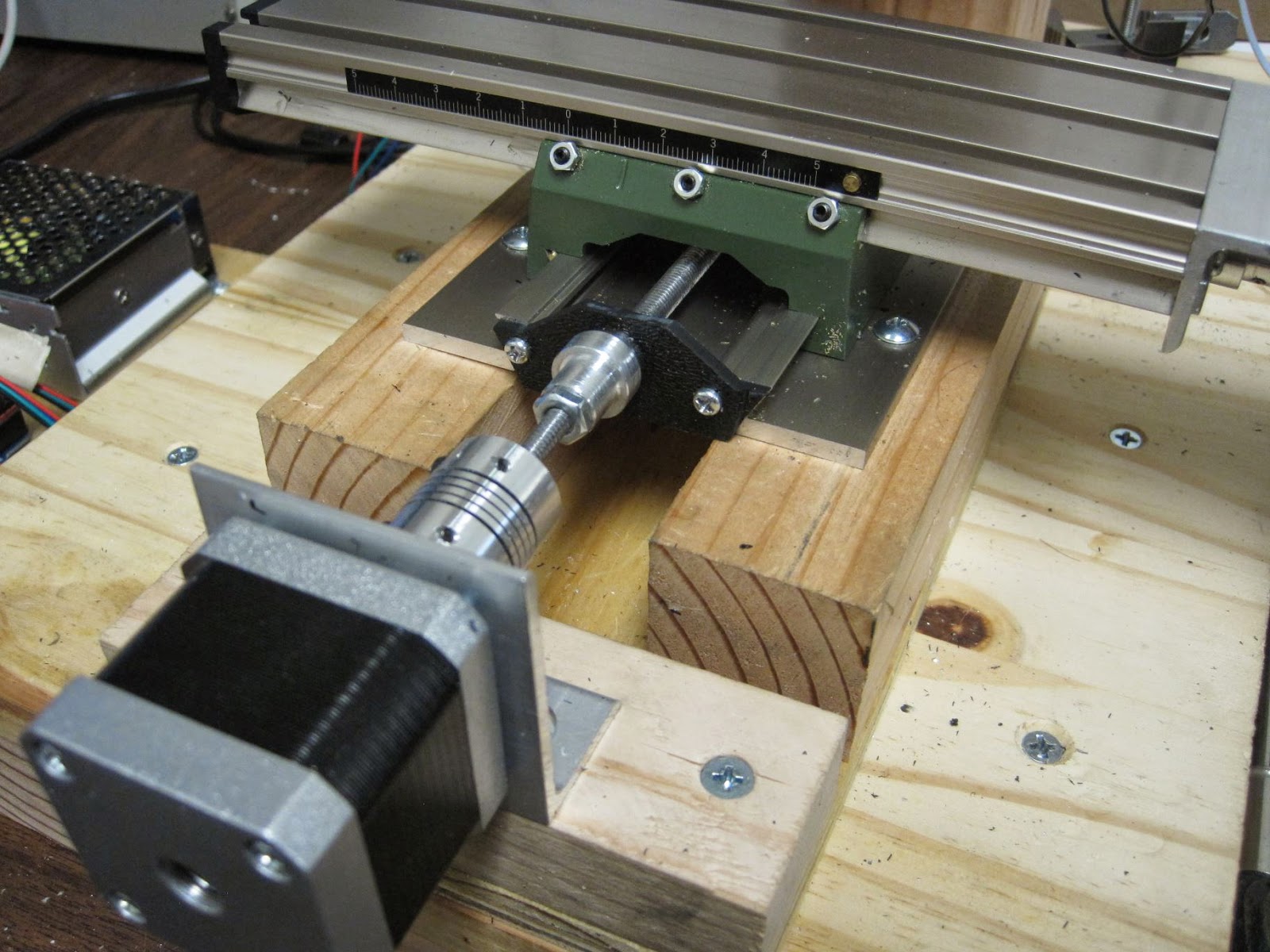